I visited Winchester again last weekend for the first time for many years and its still as good as ever. On my trip I managed to fit in the Cathedral, the Great Hall and castle museum, Winchester College, the City Museum and the Christmas Market which opened a couple of weeks ago. Had a wonderful tour around Winchester Cathedral from a tour guide called Joanna Pope – so thanks to her for reminding me of all the great stories! 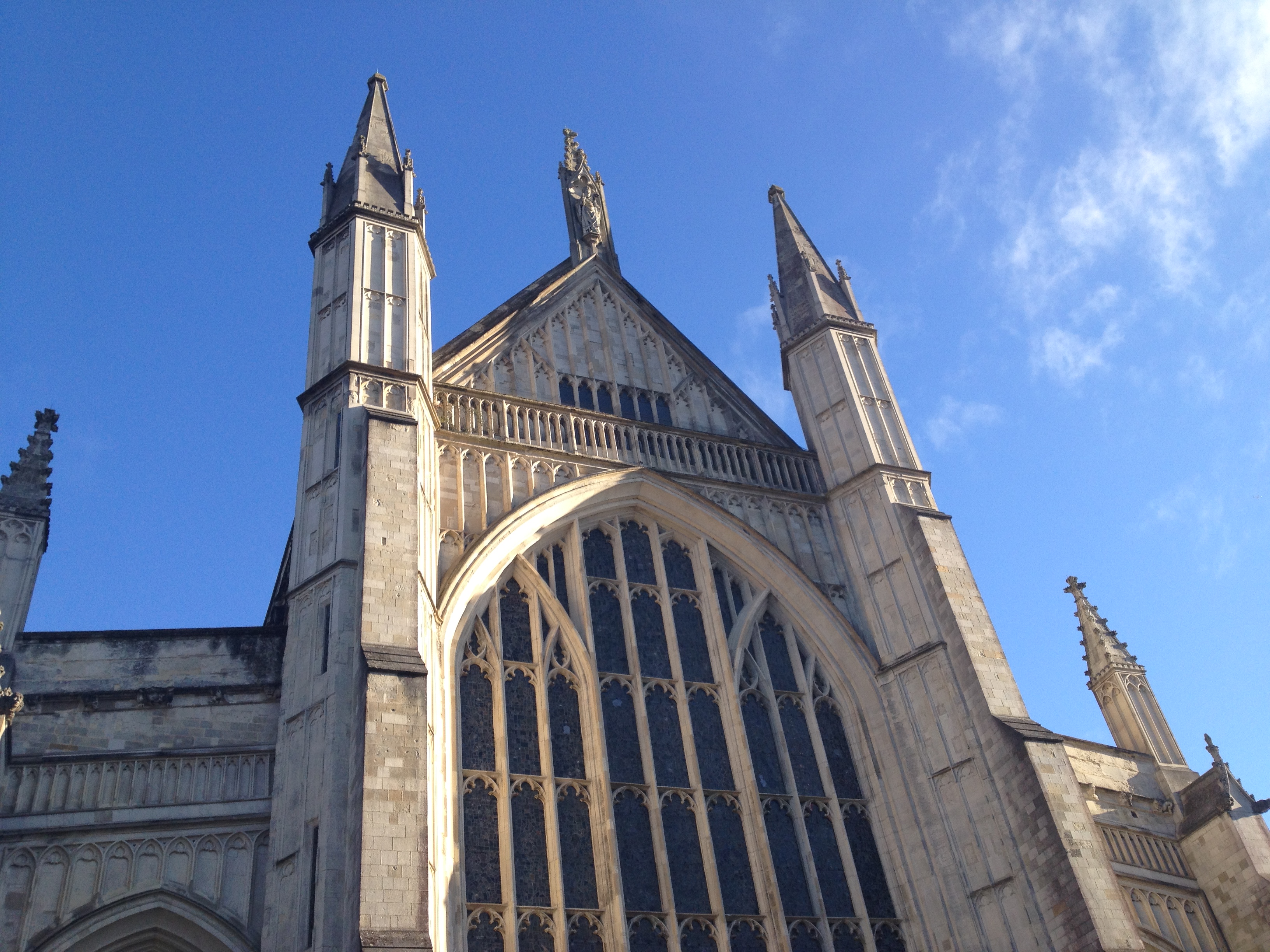 Winchester Cathedral began as a royal Anglo-Saxon church known as Old Minster, the brick outline of which you can still see on the lawn outside the cathedral today. It became the most important royal church in the country and many kings were buried there, including Alfred the Great. It was also a focus for pilgrims coming to see the bones of St Swithun.

When William the Conqueror invaded in 1066 he took over the cathedral and eventually it was rebuilt using the original stone and consecrated in 1093. Over the next 400 years, the cathedral flourished with new works of art including a new illuminated bible which you can go to see in the library and museum housed in the cathedral.

In the fourteenth century, the cathedral was remodelled in the Gothic style. Round arches were raised higher and redesigned with Gothic points, new windows, screens and vaulted ceilings were built and the cathedral became infinitely more ornate, as it looks today.

This can be confusing at first, because the cathedral is described as Norman and yet it looks so quintessentially Gothic. Our guide explained that this redesign which began in the fourteenth century covered up the Norman pillars and these pillars are still structurally at the centre of the Gothic pillars. In the transepts and in the crypt you can still see the Normal style and the difference is breathtaking.

Our guide also drew our attention to the chantry chapels in the nave. One reached right up to the top of the arch and another reached only half way. This is because one was built before the arches were raised during the Gothic redesign and the other was built before.

Winchester suffered upheavals during the Reformation, but the Cathedral was not too badly damaged, however the Benedictine monastery, St Swithun’s Priory was shut down and the cloister demolished.

One of the most amazing parts of the cathedral that hits you as soon as you  come in is the west stained-glass window. It is made up of tiny fragments of glass and you can see bits of faces and arms in the fragments, which is pretty unnerving. It looks like this because it is reconstructed from the fragments of the original window which was smashed by Oliver Cromwell’s forces during the Civil War.

On our tour, our guide explained this story with real feeling. During the Civil War the cathedral was used as a stable and as waste was swept out of the cathedral, glass fragments were swept out with it. The local people collected these fragments and saved them until the monarchy was restored and the window was reconstructed from the pieces as a mosaic.

Our guide mentioned that in 2000, organisers had considered replacing the window with a specially-designed window to celebrate the millennium. She expressed her relief that this never happened – and I agree – it is one of the most wonderful stained-glass windows I have ever seen.

Other interesting aspects of the cathedral are the memorials and tombs of some famous people including notably Jane Austen. When I was there they also had a small exhibition about her life.

I was unable to on my visit myself, but you can also go on a tour of the crypt which our guide said was certainly worth it. You can see part of the crypt by going down some steps in the north transept. This part includes a Antony Gormley sculpture of a man, who is left standing in water when the crypt floods.

At the moment there is an excellent Christmas market and ice rink on the south side of the cathedral which will be running until Sunday 22nd of December.