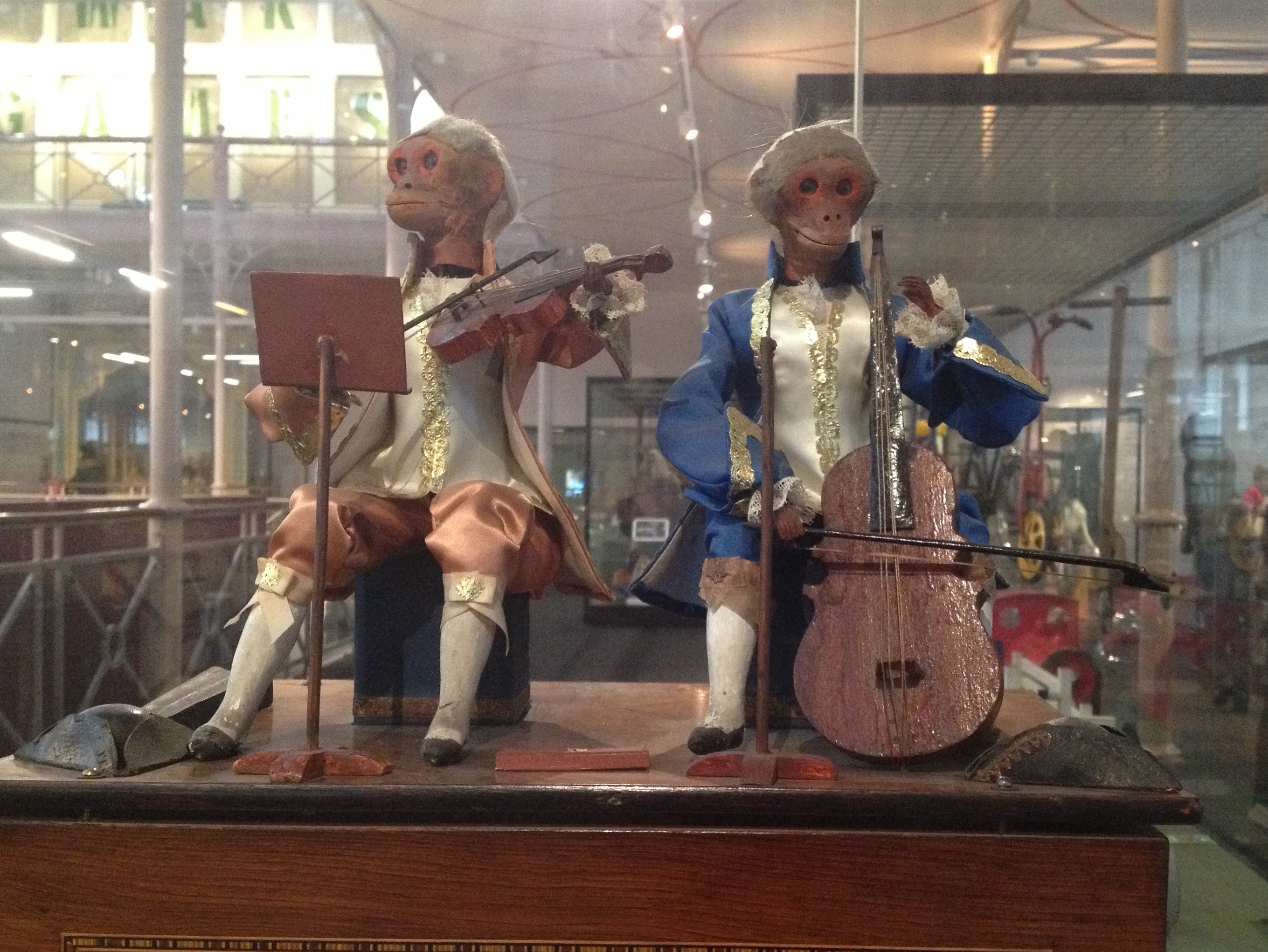 I went to the V&A’s Museum of Childhood for the first time on Friday. I had always thought it would be interesting to see all the childhood-related objects collected by the Victoria and Albert Museum in one place, but I had never got round to visiting. The objects date from the 1600s to the present day and most of the exhibits are toys, with a section containing objects associated with home life and child upbringing. 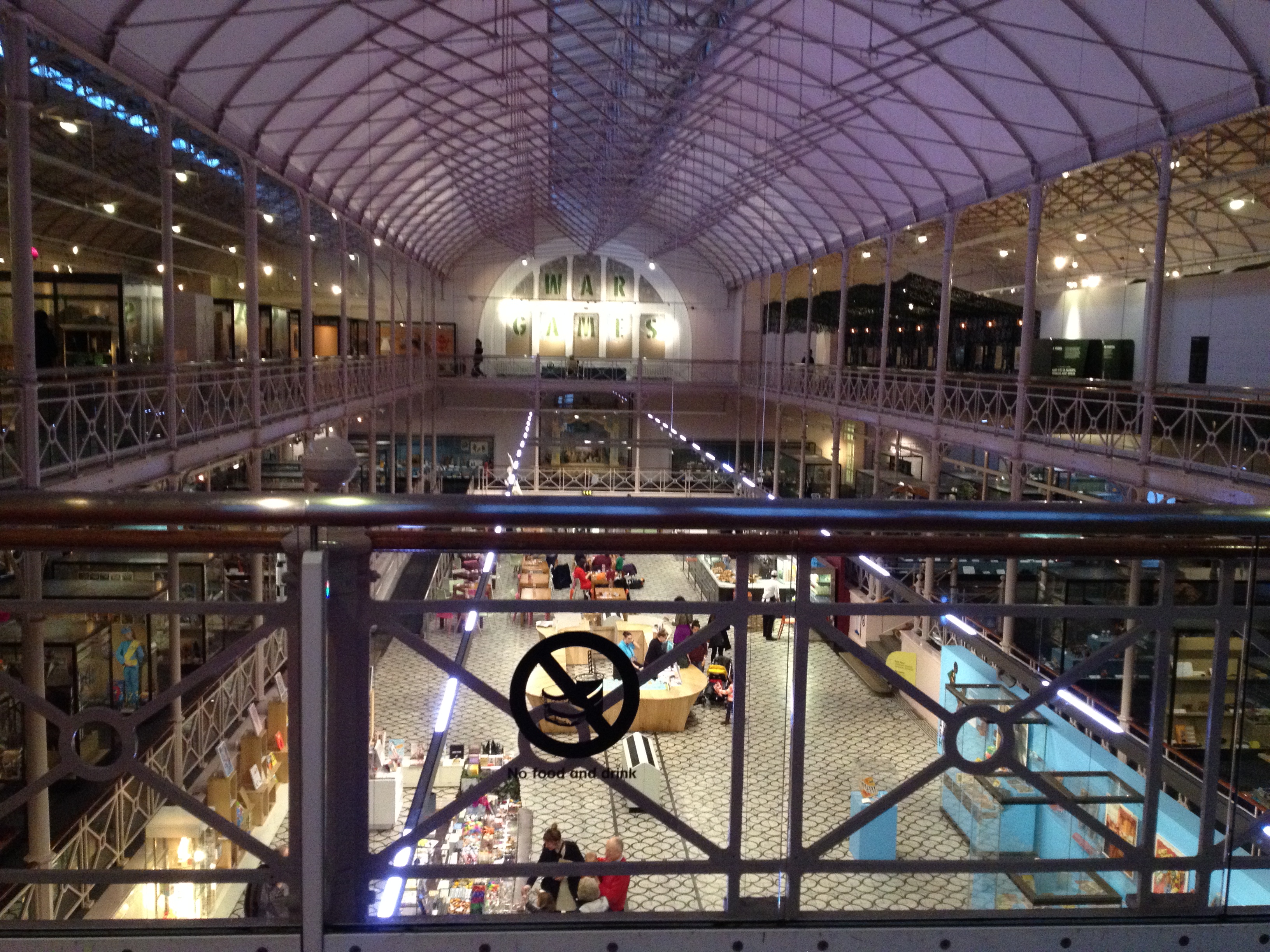 The first thing you notice about the museum is its design. It consists of a large open space containing the café and shop, with all of the exhibits positioned around the centre. This makes it a great place to visit with young children as its impossible to get lost. There were many very young children there when I visited and it seemed to me that they were all really enjoying themselves. Most of the objects on display are in glass cases with some interactive screens and activities and areas for children to play. I saw the kids interacting really well with everything and showing a real interest in the objects. Parents were also walking around showing their children the toys they used to play with when they were young. As well as the 20th-century nostalgia available, there are plenty of amazing objects from earlier centuries. On one side of the museum, the toys are arranged by the technology behind them – so for example, clockwork, magnets, springs etc. The section for optical toys was interesting as it ranged from nineteenth-century zoetropes to the Megadrive, Xbox and Playstation.

These photographs are of a large 3-dimensional theatre made from layers of card, with different sections showing different scenes. It was made by  Martin Engelbrecht in around 1721, who was famous for his illustrations of children’s books. This section also has some good interactive screens which show different toys with videos of how they work and explanations of their mechanisms. They even have x-rays so you can see how the mechanism is arranged inside the toys. On the other side of the museum, the toys are arranged into categories like soft toys, dolls, building and making etc. They have some wonderful dolls houses and dolls including the first version of the Barbie doll from 1959. Some of the dolls and soft toys were very familiar to me, while others I had never heard of but were apparently very famous.

For example, above are soft toy versions of Pip, Squeak and Wilfred from the 1930s. These characters were from a long-running cartoon published in the Daily Mirror from 1919 to 1956. They were devised by Bertram Lamb and drawn until 1939 by Austin Bowen Payne. The cartoon was incredibly popular and successful, spawning dedicated newspaper supplements, annuals like the one pictured above and even in 1921 twenty-five  silent animated cartoons. On of my favourite sections is about the history of children making toys and objects of their own, as I was obsessed with craft as a child. Pictured below is a paper mache duck and a campfire made from matches and bottle tops, both made by a three-year-old boy called Stephen, born in 1957. There is also a tank made by an eight-year-old in 1942 and some animal drawings created between 1890 and 1900. Looking at these objects really makes you realise how children from every era are just the same, as it is impossible to tell the difference between a child’s creation from 100 years ago and one today.

Some other interesting exhibits include dolls from the eighteenth-century to today. You can see how Barbie’s figure developed over the course of the last 50 years, but even more startling is the shape of older dolls, such as the 1720 doll pictured below. Also, while Barbie is usually the doll accused of being damaging to young girls, I was shocked to see how Sindy’s looks have changed since her introduction in 1963. Sindy had always been a child-like doll in relatively casual childish clothing, however her latest incarnations have made her older, wearing more revealing clothing. The museum also contains sections on the history of the upbringing of young children, with objects relating to washing, feeding and learning. They have a large case showing the development of children’s clothing between the eighteenth century and today. At the moment they also have an exhibition called War Games, which runs until 9th March 2014. This exhibition shows the various action and strategy war-related games children have played of the years, and also links the history of these toys to the actual history of warfare of the last 100 years. It ends by making the link to science fiction and asking visitors whether they think war-related children’s games are morally right. The museum is really worth a visit, with children or without, and it isn’t so enormous that you can’t see everything in a few hours. It’s located just down the road from Bethnal Green station and is open every day between 10am and 5.45pm.

1 thought on “V&A The Museum of Childhood”