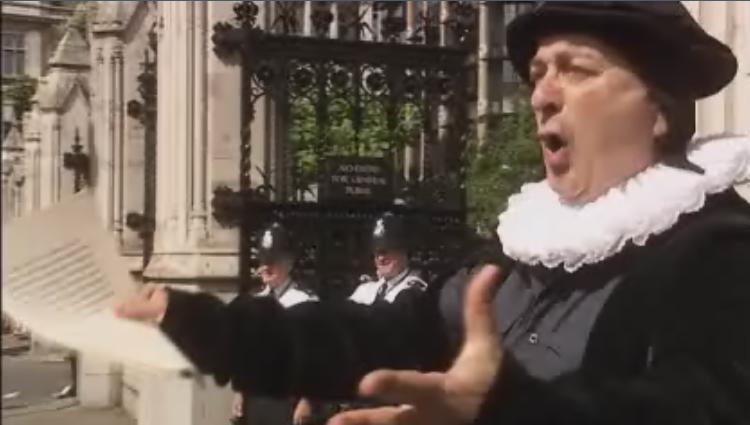 I thought I’d highlight a good history series I’ve been enjoying on channel 4, Tony Robinson’s Crime and Punishment, which is on at 7pm on Sundays. The series deals with the laws of Great Britain, how they were made and how they were enforced. He doesn’t go into huge depth on every issue he covers and, being Tony Robinson, he does present the show in a pretty quirky way, being prepared to dress up and act out the points he’s making. Clearly, if you don’t really like Tony Robinson as a presenter, his antics might be irritating, but generally I think he makes it quite entertaining. I also generally like this type of programme, dealing with a big issue and tracking it through history, instead of just focusing on one period in depth, and this gives the viewer a broader picture.

I also like the links that he makes between events and themes in history and current affairs, which I particularly noticed on last Sunday’s episode, prompting me to write this post. These links really made me realise the extent to which the themes and ideas that caused laws to be made in the past, are reflected in modern society, sometimes very vividly and because links are made to events we are familiar with, it encouraged me to start looking up the events mentioned. I’ll give a few examples of these links.

Dealing with the Tudor and Stuart periods, an interesting link was made between the work of Thomas More in promoting the concept of free speech and how free speech has triumphed in British society today. However, the point was also made that our political freedom seems to have taken a step backwards when the Serious Organised Crime and Police Act 2005 was passed, banning all unlicensed protests in parliament square, which so affected anti-war protester Brian Haw who has been living in his peace camp permanently protesting since 2001. Tony Robinson does make clear his opinions on this subject and certainly doesn’t hold a neutral view, but he does open some interesting questions on how free we perceive our society to be.

He also takes the catholic extremism of Guy Fawkes and other conspirators in trying to blow up parliament in the gunpowder plot of 1605 and makes the link between this and the recent problems of Islamic extremism, specifically the London 7/7 bombings. The point is made that as in both these cases, the state of national emergency can cause groups of society to be under suspicion and civil liberties to be lost. After both of these cases of terrorism, oppressive laws were passed, in 1603, to further persecute Catholics, and in 2005, to give the police more power to control the population. In this way it is argued that national emergency can cause human rights to be eroded and people to be alienated, and this alienation can cause extremism to thrive.

In a democratic country, a balance needs to be established between protecting people and giving them their freedom, although in reality this balance is never really fixed. It’s much more like a pendulum wildly swinging between freedom and protection as events change. I don’t think there’s much doubt that most people in this country today would think of themselves as on the free side of the pendulum but the laws that were passed after the events of 9/11 and 7/7 did change things. But was this just a brief and temporary adjustment of the pendulum or the start of something much more sinister.

The swinging of this pendulum slightly too far away from freedom towards protection, when we’re not in a state of national emergency, is particularly relevant to us now, as last week the maximum time police can hold terror suspects was increased to 42 days, after a commons vote. This triggered the resignation of David Davis from Parliament who said, ‘we’ll next see 56 days, 70 days, 90 days…In truth, 42 days is just one – perhaps the most salient example – of the insidious, surreptitious and relentless erosion of fundamental British freedoms.’

Another interesting link was made between the trial and execution of King Charles I after the English Civil War and the trial and execution of Saddam Hussein as a result of the War in Iraq. The King refused to accept the authority of those prosecuting him and refused to plead, saying ‘I would know by what power I am called hither, by what lawful authority…?’ So did Saddam Hussein, ‘I do not respond to this so-called court, with all due respect to its people, and I retain my constitutional right as the president of Iraq. Neither do I recognize the body that has designated and authorized you, nor the aggression because all that has been built on false basis is false.’ This all links back to the question of who has the right to rule, a subject that could be debated forever.

I definitely recommend the programme – although it doesn’t go into great depth, it touches on interesting subjects and makes good links, which encourages a bit of extra historical googling – and of course Tony Robinson makes it pretty entertaining anyway.