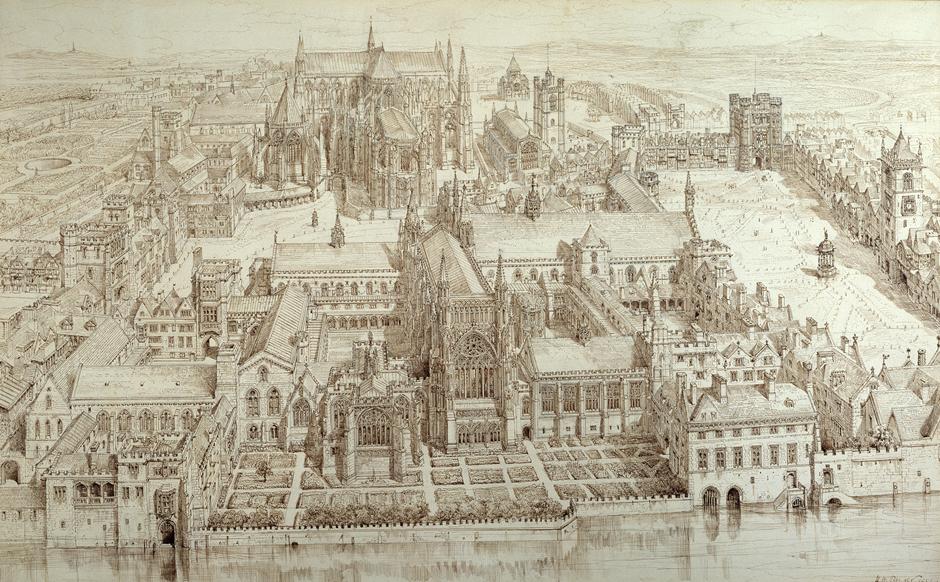 The complex of buildings found at Westminster is a little architecturally confusing. We have Westminster Abbey, clearly old from what you see inside it, Westminster Hall and the Palace of Westminster, which look similar, and Big Ben, which screams Victoriana. These buildings can easily blend together if you don’t look carefully and that blending was indeed the intention of the designers. It’s pretty shocking that in 1834, not that long ago, we lost an enormous historical palace at Westminster which consisted of amazing medieval and early modern buildings. This ‘Old Palace’ was destroyed by a terrible fire and the only surviving buildings are the Cloisters of St Stephen’s, the Chapel of St Mary Undercroft, the Jewel Tower and most notably Westminster Hall.

The Westminster site was used as a residence for Kings of England since the 11th century and much was built and extended over the course of the next 500 years. The oldest part we can still see is Westminster Hall, which was built by William II. In 1295, the Model Parliament met at Westminster, beginning the tradition for all future parliaments of England. Because the palace was not designed for intensive parliamentary use, drastic alterations were made to it between the 16th and 19th centuries. The palace must have looked a little dilapidated and in the 18th century there were calls for a new palace to be built. This clearly coincides with the fall in popularity of the medieval gothic architectural style. People preferred classical styles and Palladian additions were made. Most notable, Sir John Soane demolished the medieval House of Lords chamber and rebuilt it in the neo-classical style. This period saw a backlash against the neo-classical style and this destruction of medieval buildings. Several key thinkers began to mourn the loss of the older gothic parts of the Palace of Westminster. Some architectural writers appreciated the aesthetics of England’s gothic buildings. Horace Walpole built his gothic house at Strawberry Hill in 1747 and described the style as ‘venerable’ and ‘charming’. The enthusiasm for the style among architectural writers increased and many illustration collections and studies were published, including the influential Essays on Gothic Architecture by Thomas Warton and others, published in 1800. The cause was taken up by Auguste Pugin, who published Specimens of Gothic Architecture (1821) and Examples of Gothic Architecture (1831).

The devastating fire at the palace must therefore be seen in this context. The fire was caused by an overheated stove beneath the House of Lords Chamber and raged overnight destroying almost everything. Many people helped fight the fire, preserving some of the buildings, but many watched the fire with glee, seeing it as a punishment for unpopular politicians. If you want to learn more about the fire itself, I recommend a podcast from the House of Commons – listen here. Architects saw the fire as an opportunity to get rid of the hodgepodge of architectural styles that cluttered up the gothic. After the fire, parliament decided they needed a building more fit for purpose, but that emphasised the governments historical origins. Therefore, a competition was held for architects to redesign the palace in ‘either Gothic or Elizabethan’ style, to lessen the shock of the destruction. An architectural struggle raged through the nineteenth century between classic and gothic adherents. In 1884 Robert Kerr gave a paper to the General Conference of Architects detailing this ‘architectural civil war’, describing how

at the moment when Barry in his Club-houses offered us a new version of Wren’s Classic, we threw it over and reverted to Gothic; and at the moment when Street in his Law Courts had brought Pugin’s Gothic to a supremacy, we now cast that aside and return to Classic.

In February 1836, Charles Barry’s neo-gothic proposal for the palace was accepted and he employed Augustus Pugin to design the gothic interior. Construction was finally completed in 1870. It was designed to look medieval and fit into the surrounding medieval buildings, while still providing space appropriate for the running of parliament.