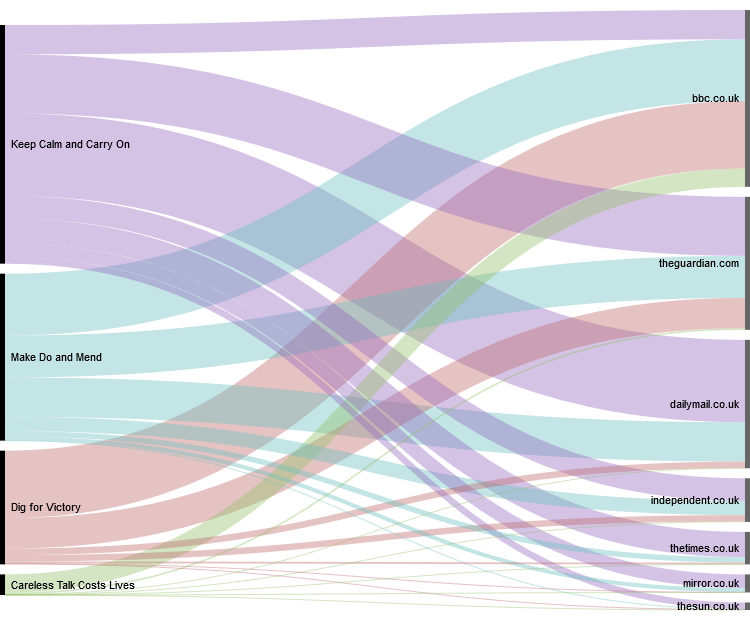 Some of the slogans coined during the Second World War by the Ministry of Information have become common phrases in British culture today. They are not always used in reference to the war or a related subject but can be employed for a whole range of reasons. My research focuses on the visual images that carry these slogans, the propaganda posters produced by the ministry, but it is also interesting to look at the use of the slogans themselves.

I have been experimenting with various tools created by the Digital Methods Initiative to look into how the images and slogans are used online. Below are the results of one experiment I conducted to look into the use of Ministry of Information slogans in British news websites. I used the Googlescraper (Lippmannian Device) to search for instances of the use of four of the most famous slogans (Keep Calm and Carry On, Make Do and Mend, Dig For Victory and Careless Talk Costs Lives) in six British newspaper websites and the BBC website. The results are displayed below in a simple Alluvial diagram made using RAWGraphs.

Firstly it is clear that the slogans are mentioned far more on some websites than on others, with the BBC, the Guardian and the Daily Mail mentioning the slogans more frequently. This may simply be due to the differences in size between the different websites, since it is to be expected that the BBC would have the largest number of webpages so the largest number of references.

There are a few variations in the slogans used by different newspapers that could be interesting to look into further. Dig for Victory is found little on the Daily Mail website while it makes up a reasonable proportion of the references on the Guardian website. The Mail includes a larger number of references to Keep Calm than the Guardian or the BBC.

There are some interesting variations between the news sites in the kinds of terms included with the Make Do and Mend slogan. The Times associates the slogan with the terms ‘home’, ‘design’ and ‘interiors’ and the Guardian with ‘life’, ‘family’ and ‘fashion’, indicating that these papers make more connections between the Make Do and Mend Concept and issues of lifestyle. In contrast, the Daily Mirror and the Daily Mail associate it more with ‘money’ and ‘clothes’. These and other terms in the wordclouds suggest an interest in economic and consumer issues for these websites.

These are just some initial observations that offer some ideas about where this research could go next. The experiment has also given me a sense of how the Googlescraper tool could be used for future research.