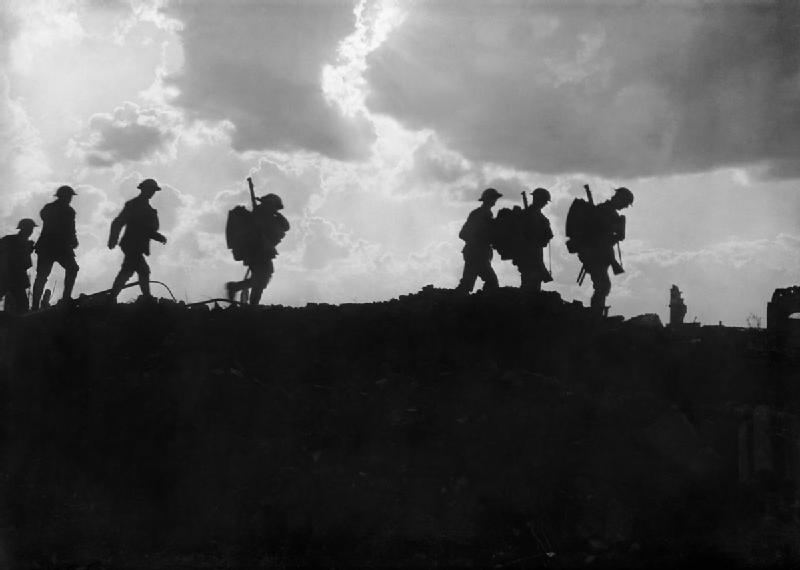 Does this image look familiar to you? If you’re in the UK you have probably seen it, or images like it, hundreds of times before, particularly last year. And it’s likely that this simple silhouette instantly leads your mind to wander to the mud and trenches of the First World War. But why has this silhouette become so persistent in modern British culture?

Every historical event or era generates a selection of images and some of these images tend to become more popular than others. One or two may achieve “iconic” status and are so often repeated that they end up symbolising that event or era. Due to the very visual nature of modern media, this process is heightened: every article, webpage or news report needs to be illustrated quickly and publishers and broadcasters often reach for the most obvious example.

The First World War was the first war to be extensively photographed and so the images that resulted from the conflict have been used and reused for nearly a century. Of course, over time, a few of these images have stood out and are well remembered in British culture.

However what I think is particularly interesting about First World War images is that it is not that one image has become iconic, it is that one image style that has become iconic. You will find this line of soldiers in silhouette all over the place in the media, sometimes in the form of a photograph, sometimes in the form of an illustration. While the photographs below may have begun this trend, it is not these images which are famous, it is the silhouette itself.

These photographs were taken by Ernest Brooks, who was sent to the Wesern Front in March 2016 as one of the first official war photographers in that area. He had previously worked at the Daily Mirror and had an eye for what would make a photograph striking and popular. Here favoured photographs of soldiers silhouetted against the horizon and two of these silhouette photos were published in The Sphere on 20 October 1917 with the words: ‘I doubt if winning 1,000 yards ever called for or found finer and sterner qualities’.

These photographs were very popular with the public, perhaps simply for their eye-catching qualities. Their reuse in later years also attests their popularity. The anonymous nature of these images mean that they are able to represent and memorialise every fallen soldier. This chimes with popular perception of the war (specifically with the tomb of The Unknown Warrior) and makes it easier for publishers to use these images as a solemn illustration, without highlighting or identifying any specific individual.

Examples of the repetition of this visual style are everywhere – I suggest you look out for it when you encounter anything relating to the First World War in the media. You can find these soldiers on the covers of books and magazines, website headers (I wonder if simply the landscape format lends these images to this use!), advertising and on television, notably in the titles for the HBO series Band of Brothers. This and other examples demonstrate that the visual style extends to other wars, not just the First World War.