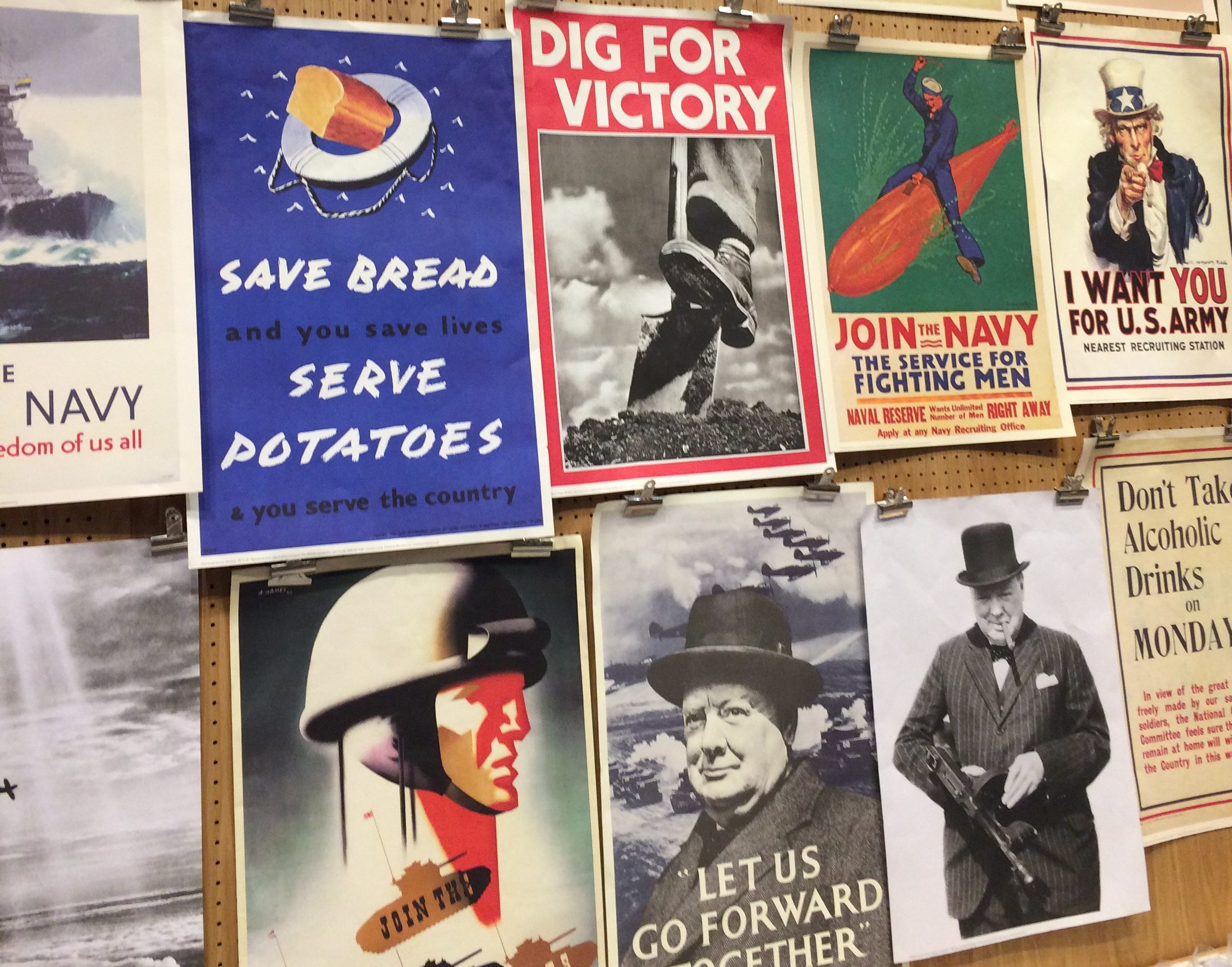 Posters provide striking and familiar visuals that illustrate, decorate and inform the public about the Second World War. The Imperial War Museum displays these posters in some of its exhibits as you might expect, but they also appear as reproductions in the gift shop, in the form of magnets, postcards and – of course – posters!

What’s particularly interesting about the use of these artefacts is which ones are on display and where, and which are nowhere to be seen.

The Imperial War Museum has a new permanent exhibition, ‘A Family in Wartime’ which focuses on the British home front. It follows the lives of members of the Allpress family, living on Priory Grove in London. On display there are reconstructions of the rooms of their house, as they would have looked during the war.

Each room is decorated with posters which relate to the theme, so for example in the kitchen you can see ‘save bread and you save lives; serve potatoes and you serve the country’, ‘grow your own food’, ‘doctor carrot’ and ‘dig for victory now’ among others. Above the coat hooks there is ‘take your gas mask everywhere’ and ‘wait, count 15, slowly, before moving in the blackout’.

These choices of posters seem to be designed to give a general impression of what the family might have seen around them during the war. They also inform visitors about the range of campaigns that were running. However there are no accompanying captions so it is difficult to know where and when these posters were displayed.

The selection of these posters may also be influenced by their visual impact: the more striking the image, the more likely it will attract the eyes of visitors. However the place where this phenomenon is most obvious is in the gift shop. The most visually interesting and memorable posters make it onto the shelves, combined together with posters from other wars, photographs and other types of image.

In the shop you can find posters that do not appear in the exhibition, perhaps because they do not fit into the thematic room contexts of the design. This demonstrates how exhibition design can affect the choice of images; what is seen in the exhibition may not reflect the images that surrounded the Allpress family during the war. Equally, what is available in the gift shop reflects the desires of visitors far more than being a representative selection of war images.

The most notable example of this is ‘Keep Calm and Carry On’, which does not appear in the exhibition yet is available in many forms in the gift shop. As it was never actually displayed during the war, it would be inaccurate to display it in the museum itself, however the visiting public are so familiar with the image and connect it so closely to their vision of the Second World War, that they want and expect to be able to purchase reproductions of it in the IWM gift shop.

There are many more obscure posters that are not represented in the museum, but can be found in the Poster of Conflict collection which is part of the Visual Arts Data Service. These are perhaps overlooked because they are less visually striking or memorable, the subject matter does not fit neatly with common exhibition themes, or perhaps just because it is preferable to display the most famous posters. It’s quite clear how the continual repetition of the same posters in museum displays comes about.

What strikes me about some of the more obscure poster examples is how seemingly small and insignificant their topics and messages are. They are not reinforcing large patriotic campaigns such as ‘Dig for Victory’, but instead urge people to ‘wipe up oil’, ‘fence or guard all openings’ and ‘stagger working hours’. The prevention of the spread of venereal disease is also a common subject, but clearly this is a less popular subject for modern public exhibitions at the Imperial War Museum!