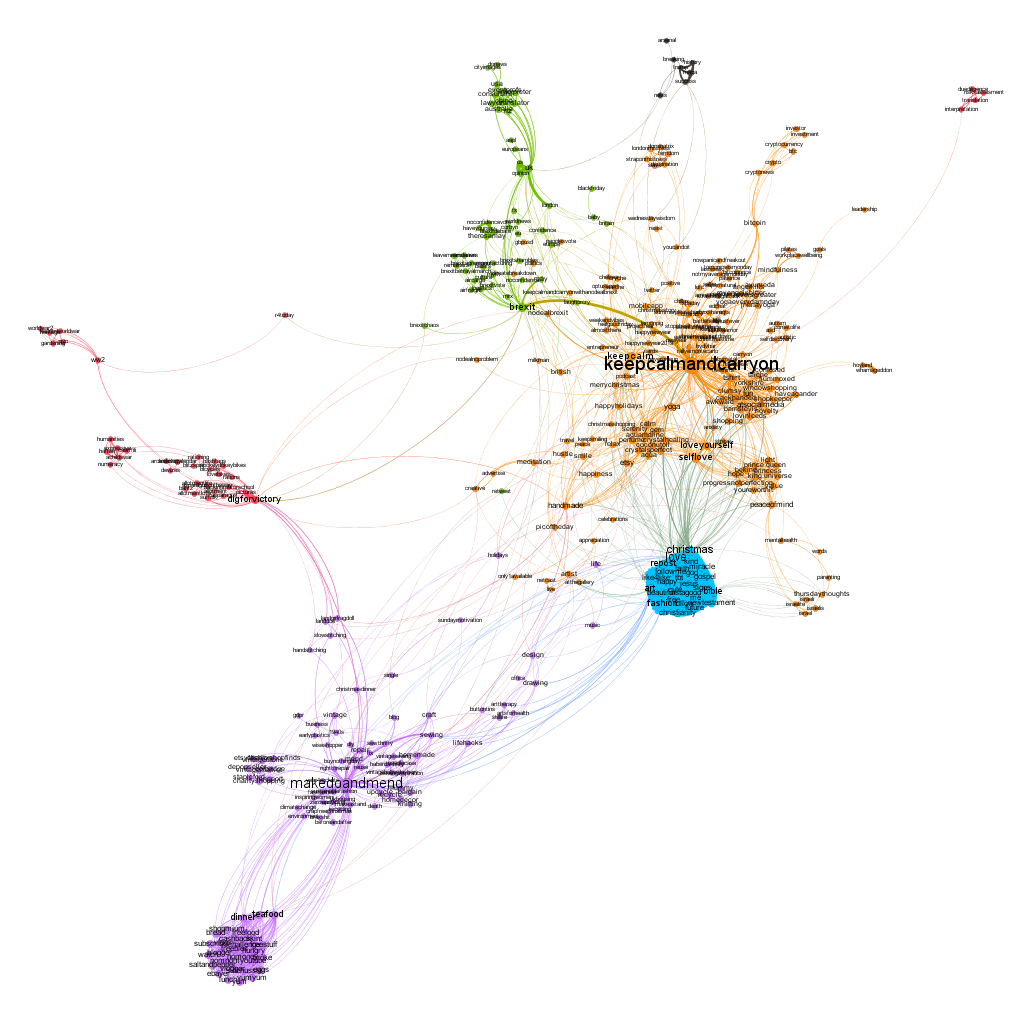 I’ve been experimenting with the method of network analysis using Twitter data to understand how Second World War slogans are being used by people in conversations. I’m focusing on those slogans created or made popular by the Ministry of Information, namely ‘Dig for Victory’, ‘Make-do and Mend’, and ‘Keep Calm and Carry On’.

Last year I taught the module ‘Digital Methods II: Working with Data’ on KCL’s Digital Culture BA. The students worked on their own projects where they were harvesting data from Twitter and visualising it in network graphs. Below are the steps I took to do the same with the Second World War slogans.

I used a set of tools created by the Digital Methods Initiative and my thanks go to them for such useful programmes which I’ve used in my own research and teaching. I used their Twitter Capture and Analysis Toolset (DMI-TCAT) to download data from Twitter for a network of hashtags network data based on the three mentioned above. I opened this data file in Gephi, a free open-source piece of software which I highly recommend everyone try.

Each node is a hashtag used on Twitter. Each edge between the nodes indicates that the hashtags have been used together in the same Tweet. I applied the Giant Component filter to remove any unconnected nodes in the dataset.

I applied the ForceAtlas 2 layout to separate out the nodes and make the network graph easier to navigate. Nodes with strong connections (i.e. they are used frequently in the same tweets) are shown as close together, those with weaker connections are pushed further apart. I also applied Noverlap and Label Adjust layouts to improve the appearance of the graph.

I adjusted the size of the nodes be their degree (the number of edges) so that those nodes with many edges appear larger than those nodes with few edges. Finally, I ran the modularity calculation to detect communities of nodes which share similar properties. Nine communities were detected, which I then coloured.

The first thing I noticed was the size of the #keepcalmandcarryon hashtag which was clearly the most frequently used and most connected with other phrases. There are 364 instances of its use in this graph. This, of course, makes sense knowing the popularity of the phrase. The second most commonly used hashtag is #brexit, used 239 times.

#keepcalmandcarryon was tweeted along with #brexit, #brexitshambles, #brexitdebate, #confidence as well as #nodealbrexit and #keepcalmandcarryonwithanodealbrexit. Indicating the phrase is used as a general call for calm and stoicism in the face of the political turmoil and uncertainty of Brexit, but also as a partisan one on both sides of the debate.

#Makedoandmend is the third most frequently used hashtag in the dataset, used 128 times. It is connected to several distinct topics. One cluster of hashtags relates to fashion and specifically sustainable and vintage fashion. Hashtags include #etsyfashion, #charityshopfinds, #charityshopping and #vintagemarket.

Another relates to blogs, vlogs, freebies and food. One hashtag, #shopmium, relates to a website that gives supermarket offers, which might explain the connections between these hashtags in the cluster. Looking at the user diversity for these hashtags in the data table also shows that tweets using these hashtags together were posted by one person promoting a series of videos under the title ‘Spending No Money for a Month’.

#Digforvictory appears 95 times in the dataset. It is used along with hashtags relating to gardening such as #allotmentlife, #allotmentlife and #asparagusontheway. It also connects to #ww2, the only one of the three Ministry of Information phrases that does connect to a Second World War related hashtag.

The blue cluster in the screenshot above shows how #keepcalmandcarryon is connected to the nodes #christmas and #love. These nodes then connect to other hashtags relating to religion such as #faith, #jesus, #christianity and #gospel. This cluster demonstrates a link between #keepcalmandcarryon and #makedoandmend through the hashtags #love and #art.

What is notable about the graph is how few direct connections there are between the three Ministry of Information slogans. #makedoandmend and #digforvictory do appear together, but #keepcalmandcarryon is not connected to either. The hashtags that act as brokers between them include those relating to craft, such as #handmade (which connects all three) and #handstitching (which connects #digforvictory with #makedoandmend) and those relating to Brexit. #Brexit is another node that connects all three slogans, perhaps indicating the relationship between discourse on Brexit and concepts relating to the Second World War.

For more information on the tools and methods I used, please take a look at the following resources:

I created a Gephi tutorial myself for my students last year, which I might go ahead and share here at some point. If you have any questions or comments about my process and observations, please comment below!

1 thought on “A network analysis of wartime slogans on Twitter”