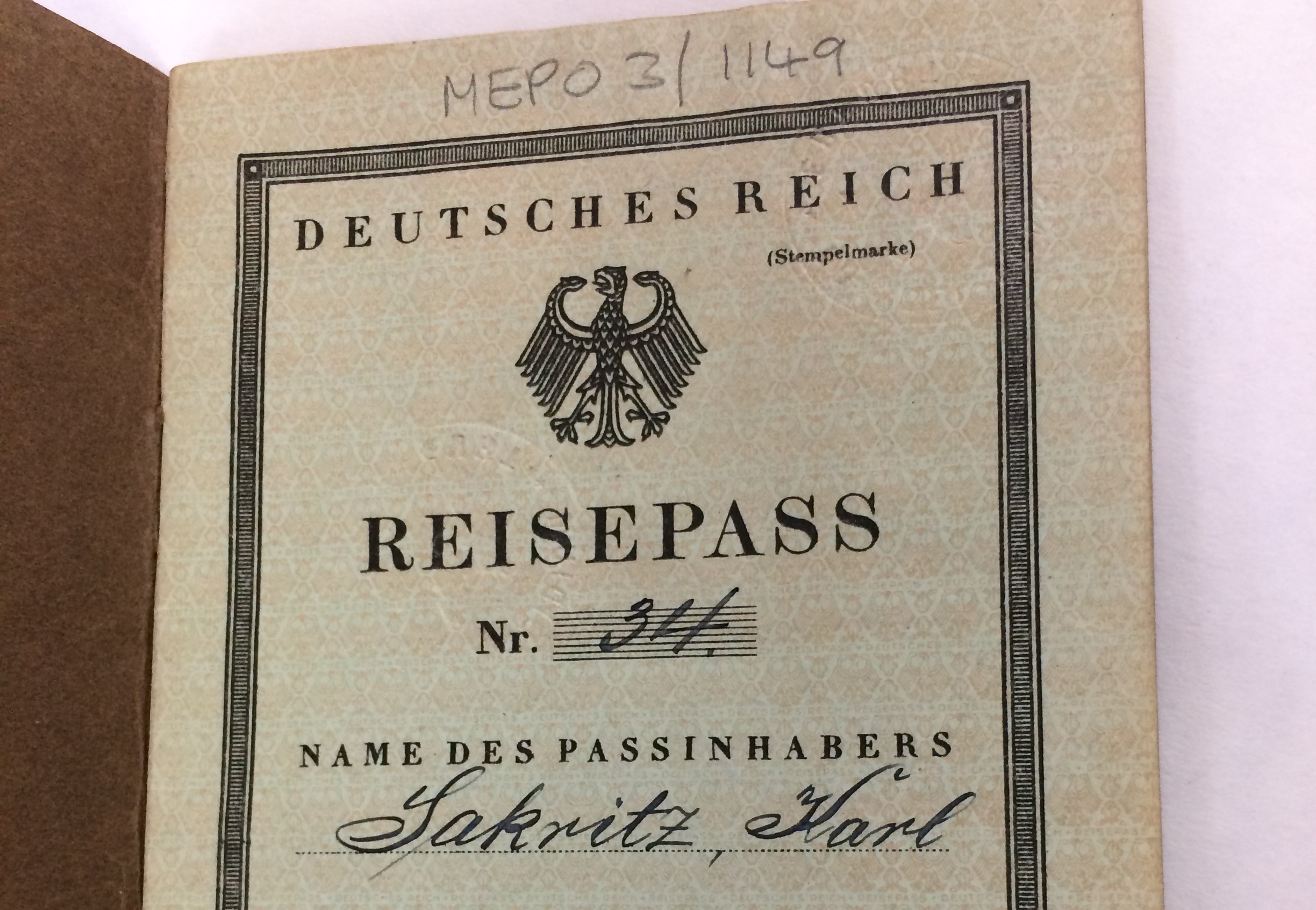 When I first started studying the publicity posters produced by the British Ministry of Information during the Second World War, I went to the National Archives and looked up every document that might be related to the design and distribution of the posters. I eventually came across the following file:

It was closed and couldn’t be ordered, as it was a police file. I was intrigued by the fact that the description was so specific about the kind of poster that was destroyed in the offence. But I left it and continued my work with other documents that were more relevant to my research. But I always thought back to this file wondering what exactly Charles Max Sakritz did, which poster did he destroy and how, and what happened to him.

I found one reference in Hansard from 2 May 1940 where Mr Ralph Etherton asked the Home Secretary:

What provisions exist for ensuring that persons of British nationality with pro-Nazi tendencies are interned in cases where that course is advisable in the national interest; and whether it is proposed, on the expiration of the short sentence which he recently received, to take any steps to intern, or otherwise restrict the activities of, Charles Max Sakritz, who has Nazi sympathies and, though born in England, has spent a large portion of his life in Germany, and whose father is German and now in Germany?

Defence Regulation 18b empowers me to order the internment of any person if I have reasonable cause to believe him to be of hostile origin or associations, or to have been recently concerned in acts prejudicial to the public safety or the defence of the realm, or in the preparation of instigation of such acts, and that by reason thereof it is necessary to exercise control over him. As regards the particular case mentioned, Sakritz was sentenced to a month’s imprisonment on the 29th April last, and I propose to consider the question of making an order against him under Regulation 18b before the expiration of the sentence which he is at present serving.

Clearly there was more of a story behind Sakritz’s conviction, relating to his known Nazi sympathies which were serious and well-known enough to be raised in the House of Commons. Eventually I became too curious to let this go, and I made a freedom of information request to the National Archives asking for the file to be opened.

Five months later a redacted version of the file was made available to view at the National Archives. I was so excited to open up this file and I was pleasantly surprised at how much was in it. It contained police reports of the crime committed by Charles Max Sakritz, witness statements, MI5 and Home Office documents, a list of items seized from the defendant’s home and even some of those items.

To tell the story in more detail, Charles Max Sakritz worked in a tailor’s shop on Upton Lane, Forest Gate. He lived nearby on Margery Road. At about 9am on 18 March 1940 he was seen by Robert Shiels in Upton Lane tearing down a government poster which had been pasted to the window of an empty shop. The poster was blue and read ‘Don’t help the enemy! Careless talk may give away vital secrets.’ 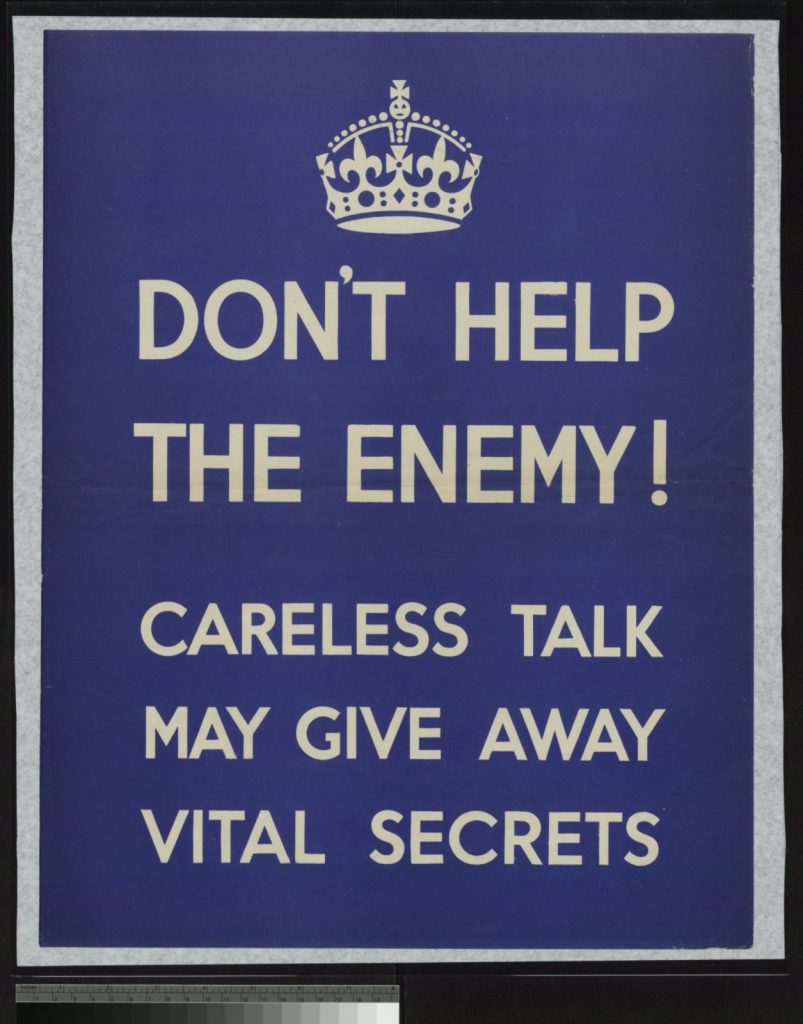 Shiels reported the crime at Forest Gate Police Station and on 19 March, Sakritz was questioned by Detective Hare. At first Sakritz denied the charge, but then admitted it, saying ‘All right, what if I did tear it. It was already slightly torn and I pulled at the paper as I passed. There is nothing in that is there?’

On 22 April, Sakritz appeared at West Ham Police Court before St. John Morrow. The charge was that he:

Did deface a notice affixed and displayed for the purpose connected with the defence of the realm and prosecution of war at 9 a.m. on 18th March, 1940, at Upton Lane, Forest Gate. Contrary to Regs. 81 and 92, Defence Regulations 1939.

He pleaded guilty and was sentenced to one month in prison and a £10 fine or in default of payment a further month in prison with hard labour. The prosecutor Mr Seaton addressed the court to say:

This case is an example of the useful part the public ca play in detecting incidents of this kind by reporting the facts straight away to a Police Officer, and that they, the public, may rest assured that the Police Authority will use all their endeavour to bring the perpetrators to justice.

This information comes from the solicitor’s report and from the report of Detective Hare to the Divisional Detective Inspector. There are also witness statements from Robert Shiels and several other people. The original poster that Sakritz ripped down from the shop window is actually included in the file. 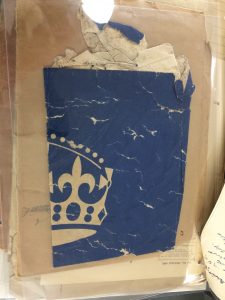 It got more interesting when I read from Detective Hare’s reports that he had searched Sakritz’s home and made enquiries locally and found evidence of his pro-Nazi feelings. Form his enquiries Detective Hare reported that Sakritz was born on 27 November 1909 in Wimbledon. His father, Max Sakritz, was fifty years old and lived in Germany. His mother was British and had died around 1925. From the age of 7, Charles Sakritz lived in Germany with his father and returned to Britain in 1929.

The file contains statements from local people who witnessed Sakritz making pro-German remarks. One particular statement reports that Sakritz made ‘an offensive noise with his mouth’ towards some British soldiers in uniform.

The search of Sakritz’s home revealed some fascinating items, many of which are actually included in the police file. The items found include:

These items give such an interesting insight into the ambiguity of Sakritz’s position and opinions, being born British but with clear links to Germany. Given his evident pro-Nazi sympathies, which were perhaps still in the process of forming at the time of his arrest, what are particularly interesting are the draft letters applying for jobs at the British War Office. The exact meaning of this will probably never be known. Incredibly most of these materials were seized in the police search and are sitting there in this file at the National Archives, including the passports and the Nazi symbols meticulously created from tin. 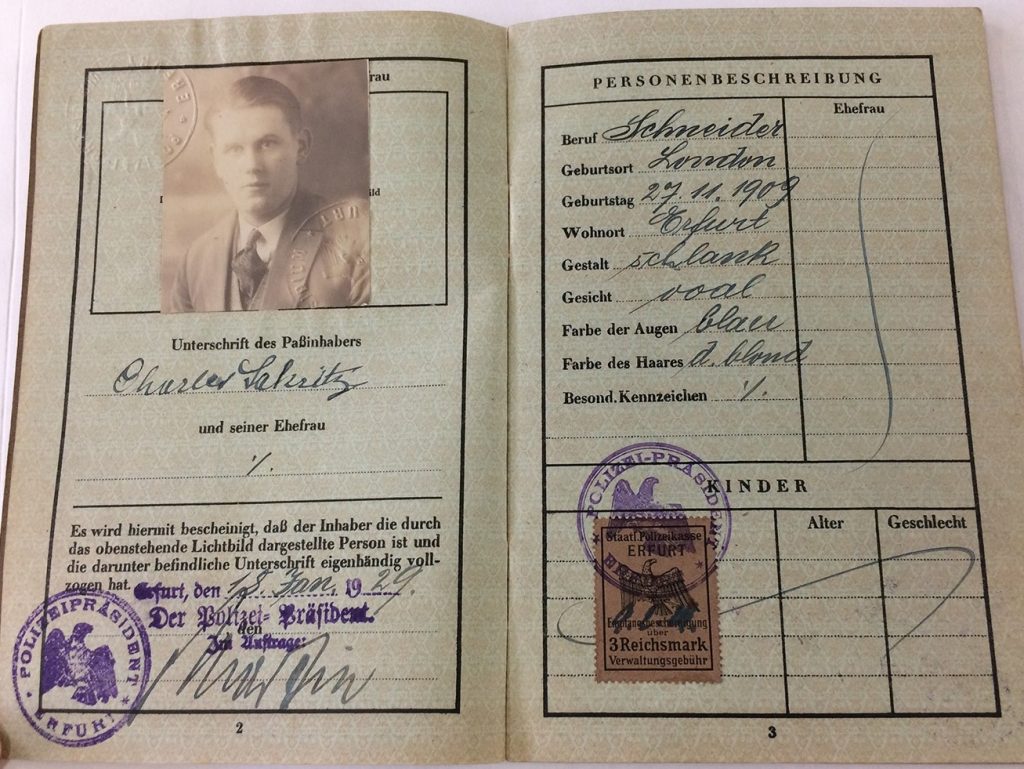 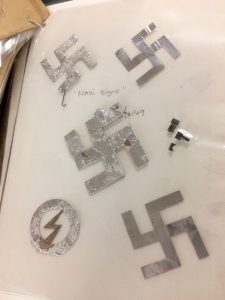 Sakritz’s Nazi sympathies were certainly enough to cause concern for the authorities. The results of Detective Hare’s search and his enquiries were reported during the hearing and the magistrate concluded:

It is obvious to anybody that you are a man of pronounced pro-Nazi sympathies. That is not an offence, but when you commit an overt act such as you did in this case, that is a matter I can deal with.

The file contains records that a Special Branch search was done on Sakritz, but nothing was found. There is a note from the Chief Constable to MI5 explaining what was so far known about Sakritz and confirming that ‘the matter has been referred to the Home Office’. It is not entirely clear what happened to Sakritz after he served his sentence and how much surveillance he was under, but since his passports remained in the police file, presumably his activities and travel was restricted to some extent.

Opening up this file has firstly made me aware of how much material is saved from simple criminal cases like this from this period. It also demonstrates the concerns of the period and how people dealt with situations where an acquaintance showed unpatriotic sentiments. Sakritz had pro-Nazi sympathies, however this would probably never have been brought into the open had it not been for his impulsive action of ripping down a poster. That poster was the local, visible and accessible manifestation of the British state and war effort, and so it was the poster that became a focus and outlet for Sakritz’s pro-Nazi feeling.