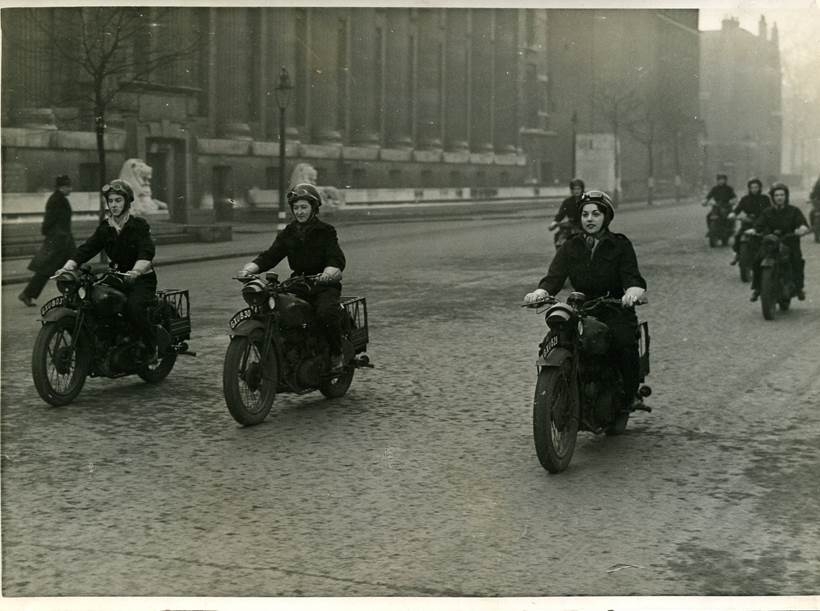 This article was originally published on the MoI Digital website on 21 November 2016.

In the summer of 2016, Anne Olivier Bell celebrated her 100th birthday. She has enjoyed a varied career including working at the Ministry of Information, the Monuments, Fine Arts and Archives (MFAA) program and the Arts Council. In 2013, she was awarded an MBE for services to Literature and the Arts.

Complementary to the research currently underway for the MoI Digital project, the University of London’s Senate House Histories project aims to compile and present stories connected to Senate House, including its role in accommodating the Ministry of Information during the Second World War. 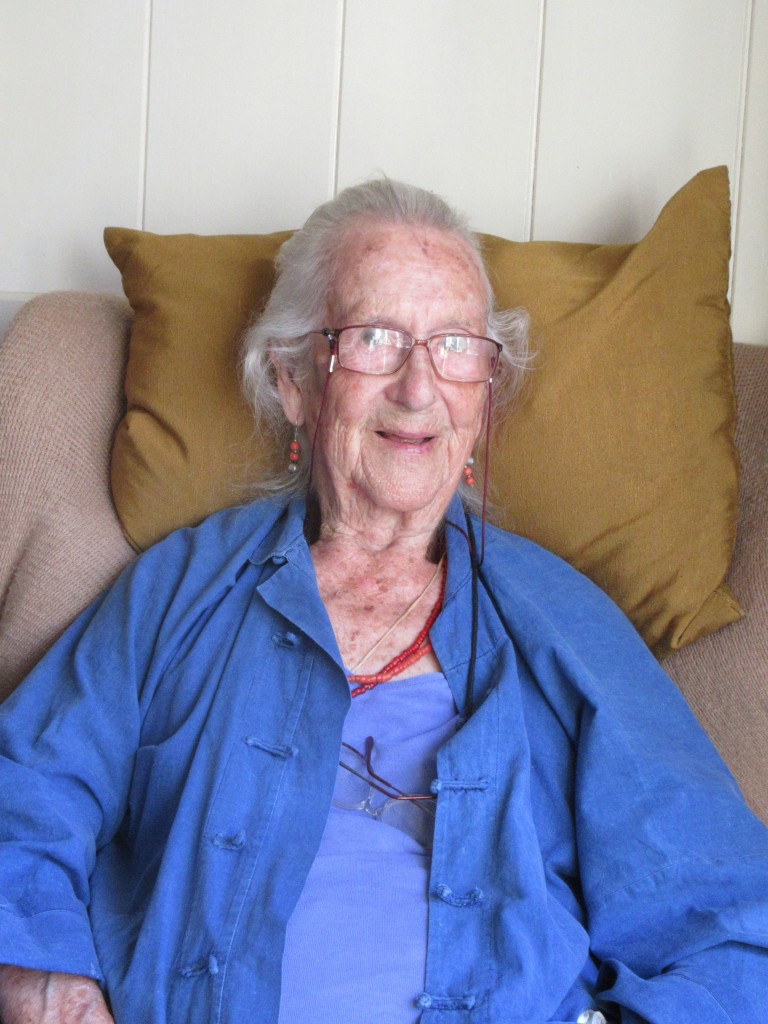 Little precise detail is known of what it was like to work at the Ministry of Information during this time and both projects seek to uncover more personal accounts of the period. In her early twenties at the outbreak of the war, Anne Olivier Bell is one of the only people alive today with direct experience of working at the Ministry of Information. So this summer, together with Sandra Elliott of the University of London, I visited her at her cottage near Charleston in East Sussex to hear about her time at the Ministry during the war.

Trained at the Courtauld Institute in London, Anne Olivier Bell was recruited into the Ministry of Information at the beginning of the war to work in the Photograph Library. She was born in Bloomsbury into an artistic family; her father was A. E. Popham, famous art historian and Keeper of the Department of Prints and Drawings at the British Museum.

Hundreds of photographs came into the building, were sorted out and they were given to the Ministry cataloguers and we had to put them in the right places.

I became a specialist in photographs of the RAF and agriculture. The public or press people were allowed in the end of the room and they expected someone to look after them. They wanted either agency or official photographs. A lot of agency photographs were taken for the newspapers.

The Photograph Division was managed by Barbara Fell, who oversaw the filing and use of all photographs as they arrived.

When photographs came in to the building, she was given the whole collection of photographs every morning and she decided which you should keep to put in the file.

There were four double tables up the side there and I sat opposite someone else who did agriculture and then there were labour and army and all the rest and the public were allowed in to the end of the photograph library and one of us would have to deal with the public and try and find the sort of thing they want and if necessary order it.

To ensure images didn’t compromise military strategy or give away intelligence, photographs were censored by the Ministry of Information before they were sent to the Photographs Division. The censors were located on the ground floor of the south building of Senate House.

When all these photographs came in to the Ministry, they came into the south part where they were censored and some were not allowed to be seen. But all the rest came in and in the end, they were filed. I didn’t have to deal with the censors I don’t think.

You used to have one or two of the agents come in with a rough booklet they were going to publish and say they want to illustrate this. I dealt with the agriculture ones and the air force ones.

They sent the copy to read and then you got out as many pictures as you thought might be suitable and showed them to the editors who came from Russell Square. One of the publication editors was Cecil Day Lewis and another one was Laurie Lee – there were about five or six publications people with the director.

You’d try and find appropriate photographs, the editor would choose them and then I had to order and get them from goodness knows where and when they came in you’d give them back to the editors and they’d decide which they would finish with.

Mrs Bell does not remember life at the Ministry of Information as particularly sociable. It seems that each division was relatively isolated in its own work and mingling between employees was not that common.

I may have been bought a drink now and then. There was a bar beside the upstairs canteen, where you could buy drinks. I, of course, have never bought a drink at a bar in my life!

In contrast to a today’s sophisticated corporate employee communications networks, news of occurrences in different parts of Senate House did not seem to spread that widely. When asked about visits from significant public figures to the Ministry, Mrs Bell suggests that “it may have been known in other parts of the Ministry but I didn’t know”.

About one year before the end of the war, she was invited to join the Publications Division on the other side of Russell Square. She explains the reasons for the move:

Because they wanted me. Actually, at the end of my career in the photographs, they reorganised the building. The photographs were moved into another corner of the place and I didn’t like it very much, so I was pleased when I was invited to go to Russell Square.

I went there as a dogsbody for Laurie Lee. My first job was to check the proofs of the transcripts of Churchill’s speeches, which were printed by the Ministry of Information and distributed around the world.

I did a book on the Island of Malta with Cecil Day Lewis and I did a book on British agriculture with Laurie Lee and some on the Airforce but I can’t remember what.

They were paperback, they cost about a shilling, they were written by Cecil Day Lewis or Laurie Lee and published in great number and I don’t know who distributed them. Very popular, very good, very interesting.

Discussing the public perception of the Ministry of Information during the war, Mrs Bell explains that the Ministry was too large and conspicuous for secrecy and instead became the butt of jokes.

No, it wasn’t secret. The Ministry of Information was a very large place. People would make jokes about it a great deal, just silly people who didn’t know, saying it was all just a lot of artists and poets and homosexuals.

One of the most colourful aspects of Mrs Bell’s experience working for the Ministry of Information was her service as a motorbike dispatch rider, taking to the road to deliver photographs around London despite the threat of aerial bombing.

Everyone had to be an air raid warden or something like that and the Ministry started a motor bicycle dispatch rider service. I think there were about ten of us we were coached to ride the bicycle at Colindale.

The police trained us, we got our motorbikes, we did trial runs out into the country and then when we had passed the exams we were put on duty once a week overnight. I think we stayed in the south building near the canteen.

You could ring up anytime and be asked to take a photograph to north London or take a special photograph that the Ministry had chosen to air mail to America or anywhere.

Sometimes they would want to reproduce the photograph for an article. Or we had to airmail a special one of interest to our office in New York.

And in the later part of the war, the buzz bombs were coming and it often seemed rather absurd to be driving a motorbike down Kingsway when it was all going pop! pop!

Just after the war, Anne Olivier Bell was recruited to join the Monuments, Fine Arts and Archives (MFAA) branch of the German Control Commission. She was the only female officer in the group of art historians and scholars recently celebrated in the 2014 film The Monuments Men starring George Clooney.

Mrs Bell’s memories of working for the MFAA are far more down-to-earth than the film depicted. Having attended the film premier in London, she describes George Clooney as ‘charming’, but the film itself as ‘all American’.

I was in the headquarters of the interior division and we lived in a small town called Bünde and the MFAA had a small house outside a large park. We distributed news and questions through the regions. Asking for information for them, asking for materials – an amount of concrete or bricks or wood – every zone needed to restore the buildings, then they came to the centre and redistributed. Roads needed mending and the telephone didn’t work properly.

I think I was only there about fifteen months, I came home and worked for Secker and Warburg and then I was lured away by the Arts Council where I worked for five years.

Anne Olivier Bell’s rich account of life and work during and after the Second World War highlight her pragmatic attitude and the fleeting but varied nature of wartime work in the context of a whole life. Despite the wide-ranging impact of the war and of the Ministry of Information on British society, at the time Mrs Bell felt she was just doing a job in a large organisation, one of many jobs she would perform over the course of her life. Her reminiscences shed light on the function and atmosphere inside the Ministry of Information during the war years.

1 thought on “Photographs, Motorbikes and the Ministry of Information: an interview with Anne Olivier Bell”